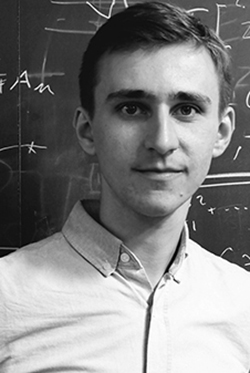 The research activity of Denis Bandurin covered several different areas of low-dimensional physics. As a part of his degree at Moscow State University, he studied field emission properties of various nanocarbons: carbon nanotubes, nanographite and graphene. For his Ph.D. thesis, Electron transport in atomically thin crystals, he completed several research projects on 2D materials: electron hydrodynamics and topological valley currents in bilayer graphene, chemical modification of graphene with a view to controlling spin transport in graphene and the first demonstration of the high-quality 2D electron gas in InSe. Denis’s current research is focused on searching for novel phenomena in 2D materials: from collective electron transport to proximity effects of graphene deposited on atomically thin magnets and superconductors.

Denis Bandurin grew up in Bryansk, Russia. At the age of 16, he moved to Moscow to study at A.N. Kolmogorov Boarding School and the following year began his undergraduate degree at M.V. Lomonosov Moscow State University (MSU). In 2014 he received his diploma in physics from MSU, where he explored properties of nanocarbon materials. In 2013 he was awarded a grant of an individual scholarship to work in the University of Wuppertal, Germany, as an undergraduate researcher. In 2014, Denis moved to the UK where he did his Ph.D. under the supervision of Profs. Irina Grigorieva and Andre Geim as a part of a Marie Curie Initial Training Network program. After graduation, he continued his research in Manchester as a research associate in physics and soon after was appointed a Leverhulme Early Career Fellow of the University of Manchester.