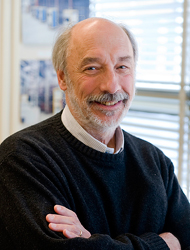 Since 1994, Dr. Taylor has been working toward the highest energy frontier where he is a collaborator on the ATLAS Detector at the Large Hadron Collider (LHC) at CERN. The unprecedented energy and luminosity of the colliding beams at the LHC will open a window on several of the most fundamental questions of high energy physics. Some of the theoretical possibilities that will be addressed at the LHC focus on the origin of electroweak symmetry breaking, the existence of super-symmetry and the possibility of unifying gravity with other forces through large extra dimensions.

Many of the signatures of ‘new physics’ involve the detection and measurement of leptons, such as muons. Dr. Taylor has chosen a path to the LHC research frontier by collaborating on the design and construction of the ATLAS muon system. The system is based on a toroidal magnetic field and has an outstanding stand-alone performance. Dr. Taylor is the Project Leader of the US ATLAS Muon effort.

Dr. Taylor’s research interests have for a long time been in precision tests of the electro-weak sector of the standard model, focusing on the experimental exploration of the nature of electro-weak symmetry breaking and physics beyond the standard model. His involvement in the ATLAS collaboration at the LHC is a continuation of that interest. Dr. Taylor has been a collaborator on the SLD Experiment at the linear collider at SLAC nearly since its inception. Before moving to SLAC, Dr. Taylor conducted a series of neutrino experiments on the weak neutral current at FNAL using a fine-grained calorimeter.

Dr. Taylor earned his Ph.D. at Cornell University. He has conducted experiments at a number of high energy laboratories around the world – including Cornell, DESY, FNAL, SLAC and CERN. From 1991 until 1993, he worked on the design of the muon system of the GEM detector at the SSC.